When they first started their business, Meathead Movers in 1997, the high school athletes were looking for a way to earn some extra cash. Their fee was usually $20 and a pizza.

As their business grew, the Steeds started getting occasional, frantic phone calls from women with little or no money who wanted to quickly move out before their abusers returned home. 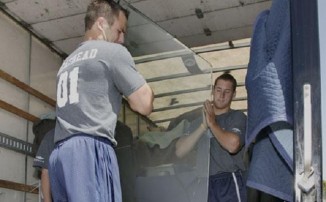 The sympathetic movers always declined any compensation and rushed to the address to load their belongings.

One day, in 2000, a situation turned volatile when the abuser came home in the middle of the move. It was then that the company decided it had to ensure that the women and the moving crew were both safe, so they partnered with a local women’s shelter.